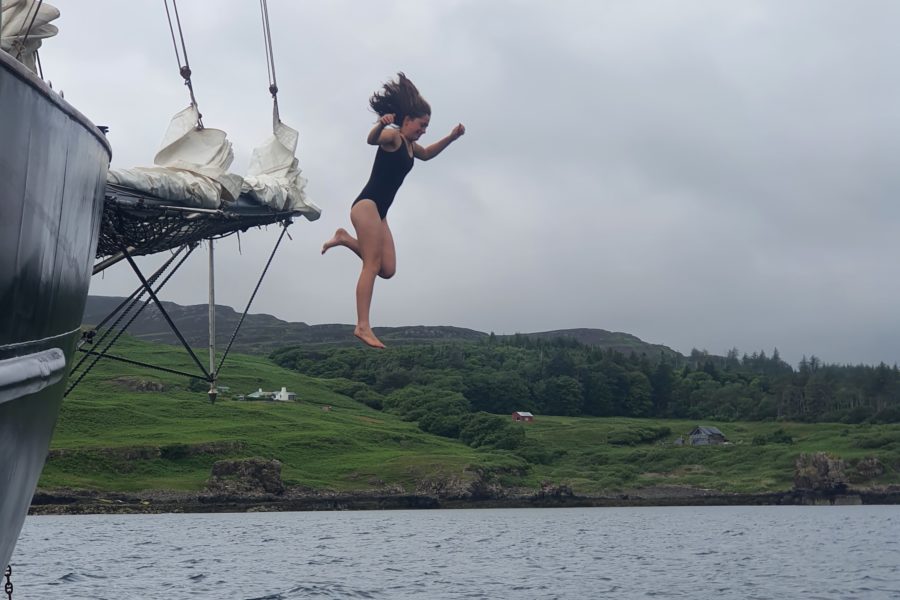 Explore the rugged scenery and hidden gems of the Inner Hebrides archipelago and Argyll on our tall ship Blue Clipper.

Sky And The Isle of Harris Taster

Your adventure begins in Mallaig, the bustling and thriving port on the north west coast along the famous road to the Isles.  The town is a fascinating place where visitors can soak up the atmosphere of a working fishing port but at the same time its remote location makes it a great place to relax.  Try the pleasant Mallaig Circuit walk which has great views over Mallaig harbour and across Loch Nevis to Knoydart.  Getting to Mallaig is also one of the highlights of this voyage, with one of the most spectacular train journeys in the UK between Glasgow and Mallaig.

Some of the islands we hope to visit:

Rum is the largest island of the group and is owned by Scottish Natural Heritage (SNH) who run the island as a National Nature Reserve.  The island is formed from an old volcanic plug, and has its own Cuillin (rocky ridge) which is often confused with that on Skye when viewed from a distance.  Visitors are able to follow two small nature trails laid out around the village of Kinloch where there is also a village shop that is usually open in the evening.  A guided tour of Kinloch Castle is a must – the castle almost exactly as it was left in the 1950’s by the former owners, the wealthy but eccentric Bullough family.

Eigg is the second largest island of the group, and is owned by a Community Trust which purchased the island in 1997, the most recent of inhabitants in the 8,000 plus years that the island has been inhabited.  As with Rum the island is rich in wildlife and geology, whilst for a spot of ‘sun and surf’ Laig Beach and the Singing Sands are recommended.

Canna is the most westerly of the Small Isles and is owned by the National Trust for Scotland who have farmed it since 1981.  Like the rest of the island group Canna has many sites of archaeological interest and has links to the Neolithic, Columbian and Viking eras.  It has been a bird sanctuary since 1938, and over 150 species of birds have been monitored in the last 40 years.

Muck is the smallest of the small isles at 2 miles x 3/4 mile wide. Basking Sharks, Minke Whales, Dolphins, Porpoises and even Orcas are seen in the waters around Muck. A visit to the craft and tea shop near the harbour at Port Mòr is a must for delicious home-baked goods and a locally made gift.

Walk, hire a bike or kayak around the island with its white sandy beaches and breathtaking scenery.

From Castlebay you will see Kisimul castle – ‘the castle in the sea’. Take a trip across the causeway to the even smaller  idyllic island of Vatersay.

Buy some Hebridean toffee at Macroons Tea room or have a wee dram in the Castlebay bar.

Owned by the National Trust of Scotland and uninhabited except for about 500 sheep!

A wild and beautiful island with caves, sea stacks, turquoise waters and  an abundance of seabirds.

Described as a paradise for wildlife and beach lovers. North Uist has stunning Atlantic beaches for example at Traigh Iar – a stunning stretch of white beach, backed by sweeping dunes, and Balnarald RSPB nature reserve, a beautiful reserve on the north west coast of North Uist with sandy beaches, rocky foreshore, marshes and sand dunes.

An island with stunning white powder beaches, heather uplands, golden eagles and rare corncrake. Discover the oldest (reportedly) rocks in Britain at Ardivachar Point, in the north west corner of the island or visit the Hebridean Woolshed to the South of the Island for high quality local crafts.

We hope to stop at Loch Scavaig – one of the most dramatic of the Hebridean anchorages with the backdrop of the rocky mountain range – The  Cuillen.

Your adventure starts in the Gateway to the Scottish Isles; the picturesque port town of Oban. With a blend of fascinating ancient ruins and vibrant Scottish culture, the town has become known as the Seafood Capital of Scotland. There will be time to explore the town before departing the boat and making your way home.

The most westerly of the Inner Hebridean Islands, Coll and Tiree are very different from each other.

Tiree known as the sunshine isle or ‘Hawaii of the North’! Tiree boasts the highest recordings of sunshine in the UK. Well known for being a surfers paradise with idyllic white sand beaches and turquoise water.

Neighbouring Coll in comparison is rugged with sandy coves and beaches without a soul in sight. Coll is a dark sky park being so far out in the Atlantic Ocean with no street light pollution and has some of the darkest skies in Europe. Climb Ben Hogh or Ben Feall for stunning views of the outer isles and take your binoculars to spot Corncrake.

For wildlife lovers this is a must! Walk along the cliffs of Lunga and meet the large colony of comical puffins.  Guillemots, Shags and Gulls can also be spotted along with whales and dolphins and eagles.

If the weather is favourable we hope to pass by Fingals Cave on Staffa with its basalt columns.

The small and tranquil Isle of Iona is known as being ‘The cradle of Christianity’ in Scotland. At only 1.5 x 3 miles its a lovely place to take a walk. Head to the ‘bay at the back of the ocean’ – next stop from here –  North America. You may be able to spot oyster catchers, sandpipers, redshanks, plovers, curlews and grey lag geese. The endangered corncrake (Crex crex) also inhabits the island.

The most convenient way to travel to Mallaig is by train, taking the train from Glasgow, via Fort William.  This is a spectacular train journey, one of the best in the country.

Perhaps the most impressive moment in the journey to Fort William is just north of Tyndrum station, where the railway describes a horseshoe curve beneath the immense Fujiyama-like shape of Ben Doran while crossing two curved viaducts, the scale of the landscape making one feel very insignificant.

On the Mallaig line the highlight is undoubtedly the northbound climb to Glenfinnan station across the famous viaduct, set in an amphitheatre of mountains and overlooking the Glenfinnan Monument, erected in 1815 to mark the spot where Bonnie Prince Charlie raised his standard in 1745.

The journey time between Glasgow Queen Street and Fort William is about 3¾ hours, between Fort William and Mallaig just under 1½ hours.

You could choose to fly into Glasgow before you embark on the train journey to Mallaig or take the time-saving and still romantic way to reach the Highlands on the Caledonian Sleeper from London, alias the Deerstalker; the moment of raising the blind in the morning to the sight of mountains when the previous view was the bowels of Euston station is an uplifting contrast. It is also miraculous and heartening that some of the most desolate platforms in the world can still be connected to a capital city by sleeper train.

While Ullapool may appear to be a long way from everywhere – it’s relatively easy to reach  by air, by coach, by rail/coach and by road.

Every effort is made to ensure that the details on public transport are correct and up to date, however details do change depending on weather, ferry requirements, time of year etc. Please check with the operator prior to traveling to ensure you have the correct information. A useful website for travel in Scotland is www.traveline.org.uk

Citylink Coaches operate a bus service from Inverness to Ullapool. This runs in conjunction with the ferry service so times should be checked and tickets booked in advance.

D & E coaches also operate a service from Inverness to Dingwall, through Strathpeffer to Ullapool and onwards north to Lochinver, Scourie and Durness (This also allows for bikes being taken on a trailer during summer months).

Citylink operate from Glasgow/Edinburgh to Ullapool and onwards to Stornoway.

The Westerbus also operates from Inverness to Gairloch connecting with an Ullapool service at Braemore Junction on a Monday, Wednesday & Saturday. For more information contact 01854 612966.

There are no rail links to Ullapool, the nearest station is at Garve and this is a sub-line between Inverness and Kyle. Inverness station is linked to most of the UK, and from Inverness you can use the links above to get to Ullapool or hire a car and drive. There is also a sleeper service between London and Inverness that not only means you arrive here refreshed but can save a day of your valuable holiday time by travelling over-night.