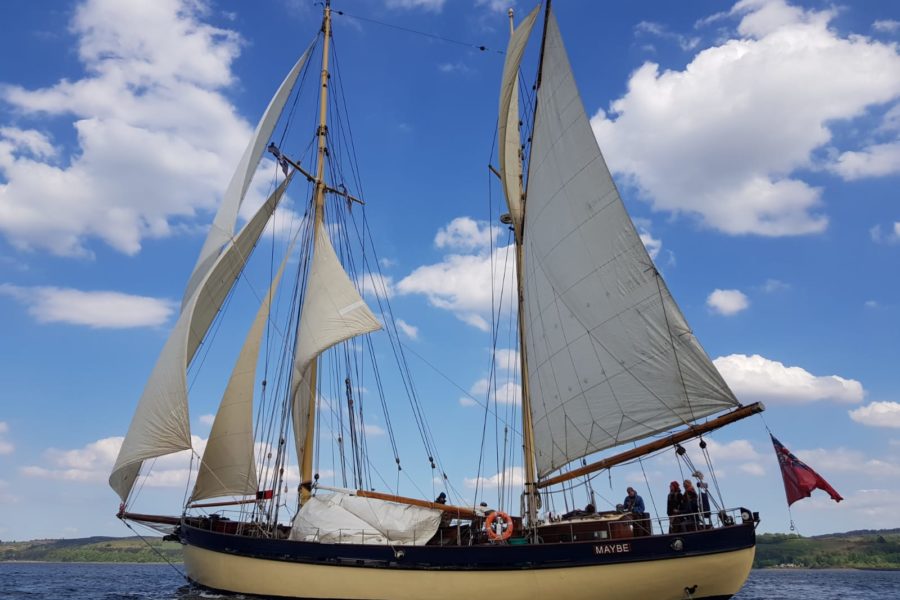 Join Maybe Sailing on board Tall Ship Maybe as we explore the beautiful Firth of Clyde on the way to Oban. Navigate the narrow Kyles of Bute , explore the Burnt Isles and experience some of the most dramatic scenery Scotland has to offer from the deck of Tall Ship Maybe. You can take your turn on the helm, help to hoist the sails and gain some nautical skills. Or sit back, relax and soak up the Scottish sunshine.Your adventure will end  in  the picturesque port town of Oban. With a blend of fascinating ancient ruins and vibrant Scottish culture, the town has become known as the Seafood Capital of Scotland.To enquire about this voyage please click the ‘BOOK NOW’ button below and you will be re-directed to our booking agent VentureSail Holidays where you can make an enquiry. VentureSail manage all our holiday voyages and the team at the office are available on 01872 487288 if you have any questions.

Firth of Clyde to Oban

Some of the islands we hope to visit:

The most westerly of the Inner Hebridean Islands, Coll and Tiree are very different from each other.

Tiree known as the sunshine isle or ‘Hawaii of the North’! Tiree boasts the highest recordings of sunshine in the UK. Well known for being a surfers paradise with idyllic white sand beaches and turquoise water.

Neighbouring Coll in comparison is rugged with sandy coves and beaches without a soul in sight. Coll is a dark sky park being so far out in the Atlantic Ocean with no street light pollution and has some of the darkest skies in Europe. Climb Ben Hogh or Ben Feall for stunning views of the outer isles and take your binoculars to spot Corncrake.

For wildlife lovers this is a must! Walk along the cliffs of Lunga and meet the large colony of comical puffins.  Guillemots, Shags and Gulls can also be spotted along with whales and dolphins and eagles.

If the weather is favourable we hope to pass by Fingals Cave on Staffa with its basalt columns.

The small and tranquil Isle of Iona is known as being ‘The cradle of Christianity’ in Scotland. At only 1.5 x 3 miles its a lovely place to take a walk. Head to the ‘bay at the back of the ocean’ – next stop from here –  North America. You may be able to spot oyster catchers, sandpipers, redshanks, plovers, curlews and grey lag geese. The endangered corncrake (Crex crex) also inhabits the island.

From Glasgow: around 35 minutes (23 miles)
James Watt Dock Marina is located off the main M8/A8 road to Greenock. Once through Port Glasgow, continue on the A8 following signs for Greenock. At the traffic lights between the Arnold Clark Vauxhall and Ford garages continue straight on then take a right hand turn at the next set of traffic lights.

From Glasgow Central: around 40 minutes)
Cartsdyke Station is approximately 10 minutes walk from the marina and provides a frequent service between Glasgow Central and Gourock. There are two trains per hour from Cartsdyke to Glasgow at 17 and 47 minutes past the hour and from Glasgow at 05 and 55 minutes past the hour. Times may vary at peak hours and on weekends/bank holidays. We would recommend that you check train times before travel.

To reach the Station

From Cartsdyke Station: around 10 minutes (400m)

From the entrance to James Watt Dock cross the main A8 at the pedestrian lights turn right and proceed along the main road, passing the Volkswagen garage and turning left into Macdougall Street. The station is at the end of this street. Platform 1 is for all Glasgow trains, Platform 2 for Greenock/Gourock.

By Air
The marina is around 20 minutes from Glasgow Airport and 1 hour from Edinburgh Airport where hire cars are readily available.  Follow the road directions for travel by road.

Alternatively there is a link bus from the airport to Paisley Gilmour Street Station from where there is a half hourly train service to Cartsdyke Station.

If you come by train, the journey takes you along the world-famous West Highland Line. First ScotRail runs trains six times a day from Glasgow Queen Street Station to Oban (two on Sunday). For times and prices visit the First Scotrail site. You can also phone National Rail enquiries on 08457 484950 or visit their website, and they have a good app for smart phones.

Flying to Glasgow or Edinburgh is easy. Both airports are served by all the major, and many of the minor, UK airlines. This provides plenty of flights to choose from with bargain rates. In addition to being busy domestic airports both Glasgow and Edinburgh receive daily scheduled flights from Europe. Glasgow also boasts direct flights to and from the United States and from Dubai.You can also fly to Oban directly by private charter flight to Oban Airport at North Connel.

Oban is a busy ferry port with regular ferries to and from the islands of Mull, Colonsay, Coll, Tiree, Lismore, Barra and South Uist. Many of these ferries also link up with other islands. For more information about the ferries you can visit the Calmac website.