History OF The Blue Clipper

Tall Ship Blue Clipper was built in 1991 at Feab Marstrandsverken in Sweden. In 1992 the famous brandy company Hennessey chartered Blue Clipper to celebrate the anniversary of the first delivery of cognac from France to Shanghai 120 years earlier. Painted white and with the name ‘Spirit of Hennessey’ Blue Clipper repeated this historic voyage. She has appeared in various TV programmes and TV commercials including the Trade Winds TV series starring Hugh Johnson. Following this, she went into private ownership and sailed in Mediterranean waters under a Maltese flag. 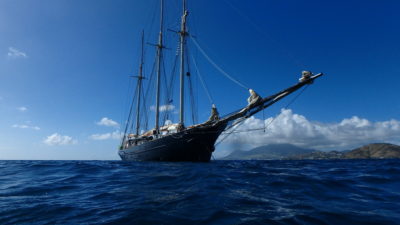 Maybe Sailing acquired the ship in 2016. After an extensive maintenance period the ship sailed to London to begin a 5 month tall ship Regatta, the 2017 Rendez-Vous. The ship was one of only four vessels to complete the whole race, travelling over 10,000 nautical miles visiting Portugal, the Canaries, Bermuda, USA, Canada and France. This Regatta was to commemorate the 150th Anniversary of the Canadian Federation. It was an extremely successful regatta for Blue Clipper and her crew, placing either 1st or 2nd in four of the five race legs.

2018 marked a new chapter for the vessel, as she was repainted Blue and travelled North once more to visit the Arctic before heading to the Caribbean for some winter sunshine.

Blue Clipper is a three masted gaff rig schooner. This means that the sails are rigged to run from forward to aft along the length of the ship. There are 10 sails, with an area of 675m2. She has a steel hull and teak deck, steel masts and wooden booms/topmasts.

Below deck Blue Clipper has three main compartments. Furthest forward is the forepeak, with 4 trainee berths and 2 crew bunks. In midships we have the guest accommodation with 6 twin ensuite cabins and a family cabin for 4-6.  Furthest aft there is the crew quarters, with 4 twin cabins and shared bathroom. The engine room and lazarette are also located at the aft of the ship. At full capacity the ship can accommodate 30 people. The deckhouses are home to the galley, the saloon and the wheelhouse.

The ship usually sails with 8 crew, made up of experienced permanent crew and eager volunteers, wanting to put their sailing knowledge and experience to good use.

All meals are included in the price of your voyage along with tea and coffee. Breakfast, Lunch, cake in the afternoon and Dinner are prepared by our lovely chef and served in the comfortable saloon. Alcoholic  drinks are available during meal times, at anchor and when the vessel is alongside in port.

In the middle section we have the guest accommodation with 6x twin en-suite cabins and 1x en -suite six-berth family cabin. Each cabin has two bunk beds with comfortable memory foam mattresses, duvet and pillow. Each bunk has it’s own reading light and all cabins have a porthole for natural light. Each cabin has heating/air conditioning available.

Each bathroom has a shower, sink and toilet.

All cabins have plug sockets for charging electrical devices. These are European 2 pin sockets. We ask that you do not leave items on charge when you are not in the cabin. 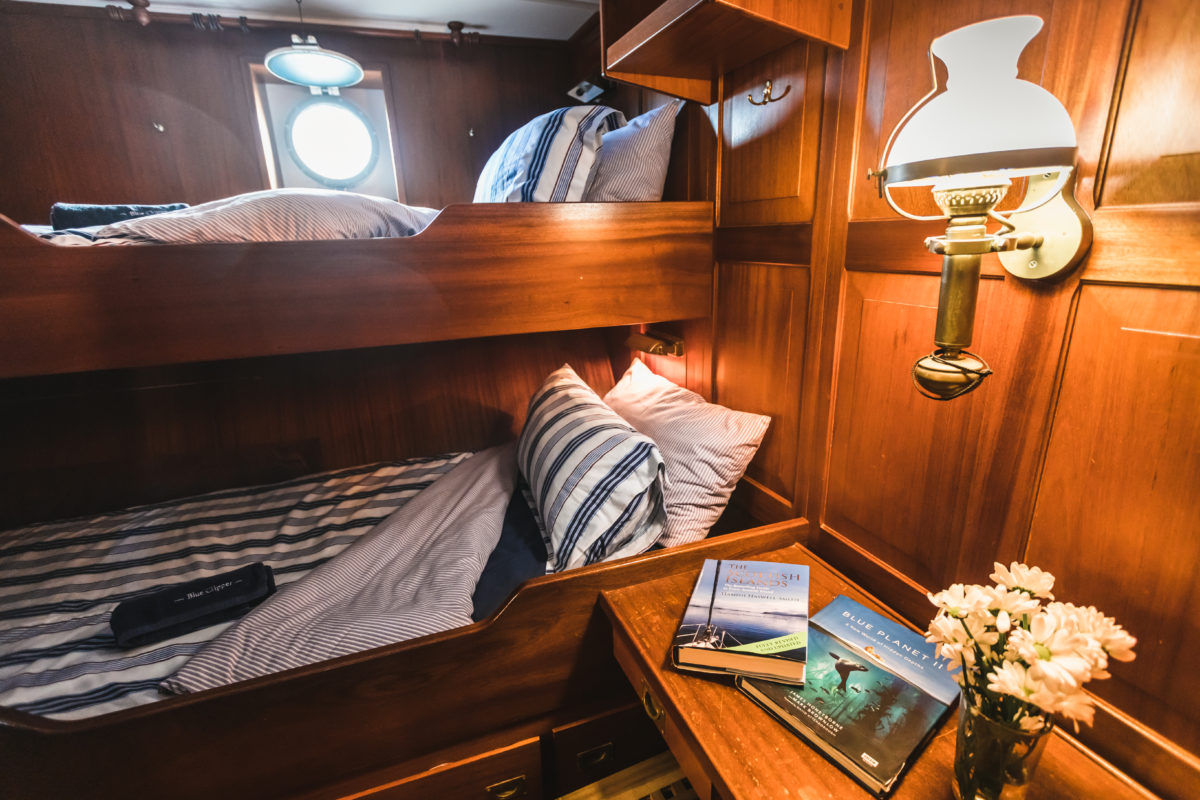 We have some great clothing items to purchase as a souvenir of your time with Blue Clipper. This can be purchased at the time of booking or you can purchase on board and pay for at the end of your voyage.

We are able to do laundry on longer passages, depending on the sea conditions. If you would like to do laundry on board please speak to the hospitality manager or stewardess on board. The fee for laundry service is £5 per load. Please note that Maybe Sailing does not accept liability for damage to clothing caused by this service.

It was a terrific week on the beautiful Blue Clipper.
Julie Macnab – TS Blue Clipper August 2021