TS Maybe has a rather famous history, built in 1929 and owned by Jan Jacob Van Rietschoten, father of the flying Dutchman, Cornelis ‘Conny’ Van Rietschoten, the only skipper to win the Whitbread Round the World Race twice. In the hands of the Rietschoten family, TS Maybe spent many years sailing around the world. 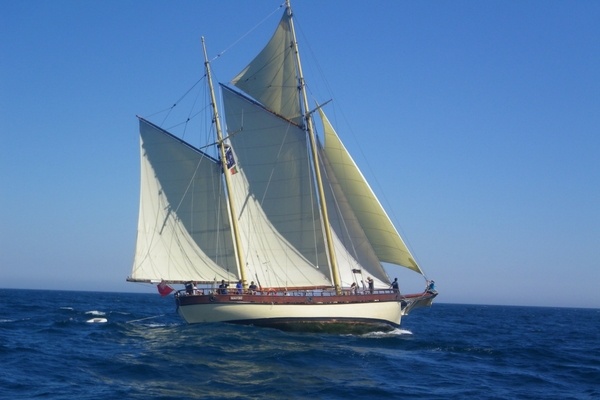 In 1962, TS Maybe was bought by the Swiss family Hans Fehr, who were experienced sailors and enjoyed sailing in warmer climates. She sailed mainly around the Mediterranean and in the 1970s regularly crossed the Atlantic between the West Indies and the Mediterranean. IN the 1980s she also sailed through the Panama Canal and up the East coast of the USA to Canada.

Tall ship Maybe was sold to her present owners in 1989 and underwent another complete restoration retuning to sailing in 2007. She returned to the International Tall Ship Races in the Baltics in 2009. In 2011, TS Maybe was restored to her original gaff rig.

TS Maybe is a gaff ketch. This means that the sails are four cornered, fore-and-aft rigged, controlled at it’s peak by a spar (pole) called the gaff. The distinguishing characteristic of a Ketch is that the forward of the two masts (the mainmast) is larger than the after mast (mizzen). TS Maybe has 7 sails.

The ship is 24m in length overall, and the height of the main mast is 25m. TS Maybe is a strong sea worthy vessel build with extra strength by using steel frames, a hardwood hull and teak decking.

Below deck TS Maybe has three main areas. The furthest forward is the forepeak, where there is a 6-berth cabin and shower room. In the midships area are the galley, saloon, 4 further cabins and another shower room. Furthest aft is the ‘dog house’. This is where 2 crew members sleep along with all the navigations and radio equipment and the engine room. All the cabins have twin bunks with all bedding provided ,a wash basin and plenty of storage place.

On sail training voyages TS Maybe sails with a total of 14 trainees and 4 crew members. All crew are experienced in their relevant field and are here to make sure you have a safe and fantastic time during your voyage. 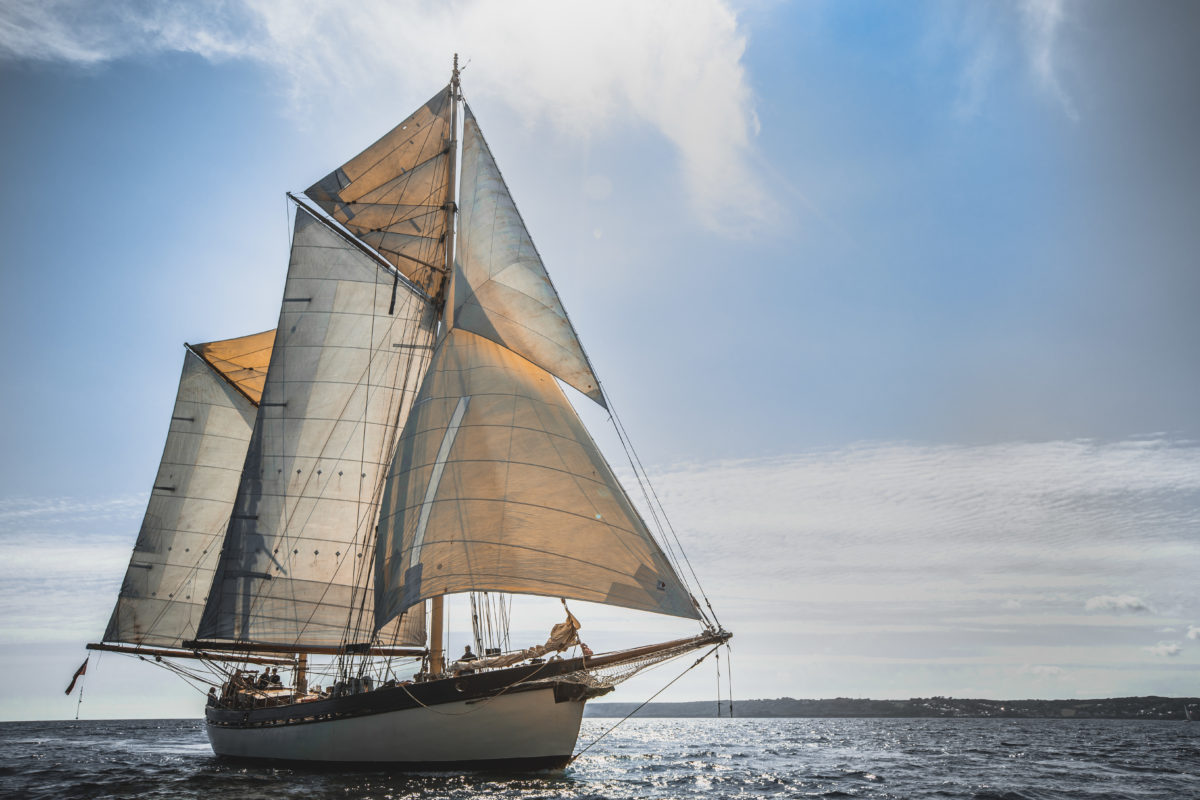 Depending on conditions, there should be plenty of opportunities for you to be involved in sailing Maybe during your time on board.

All sails are set using ropes located across the deck. In general there are two types of line handling; hauling and easing.

Hauling involves pulling the line, and often requires more than one person depending on how heavy the load is.  When hauling, use a hand over hand motion, and use power form your legs to avoid strain on your back.  You will notice that we use the chant ‘2, 6, heave’ on board, to create rhythm and help everyone pull together.  Why not ask a crew member where this chant originated from!

Easing involves letting out the line in a controlled way.  This is usually when we are taking the sails down.  Again, it may require more than one person if the line holds a lot of tension.

You will get the most out of your voyage by joining in on deck and helping your shipmates to get jobs done.

All meals are freshly prepared by our dedicated Chef on board unless it’s a sail training adventure, on these voyages your watch team will be responsible.  Please let us know of any dietary requirements before you join the boat so we can accommodate your requirements.

All private cabins have bunks and plenty of space to store your personal gear. Bedding is provided. All cabins have a sink and a radiator.

There are UK plug sockets in all the cabins. We ask that you do not leave items charging or plugged in when you are not in the cabin.

The Saloon and Galley

The saloon and galley are where you can sit and relax, sing sea shanties in the evenings and enjoy delicious meals prepared by our chef.

The ship carries water in 3 large tanks. We fill up these tanks at the beginning of a voyage and usually do not have the opportunity to fill up with water again until the end of the voyage. It is very important that everyone on board tries to conserve water wherever possible.

Maybe can provide power through large batteries and electricity can also be produced by our generators. Please help us to conserve energy by turning lights off when you leave your cabin, and taking care to remove personal devices from the power points when charged. 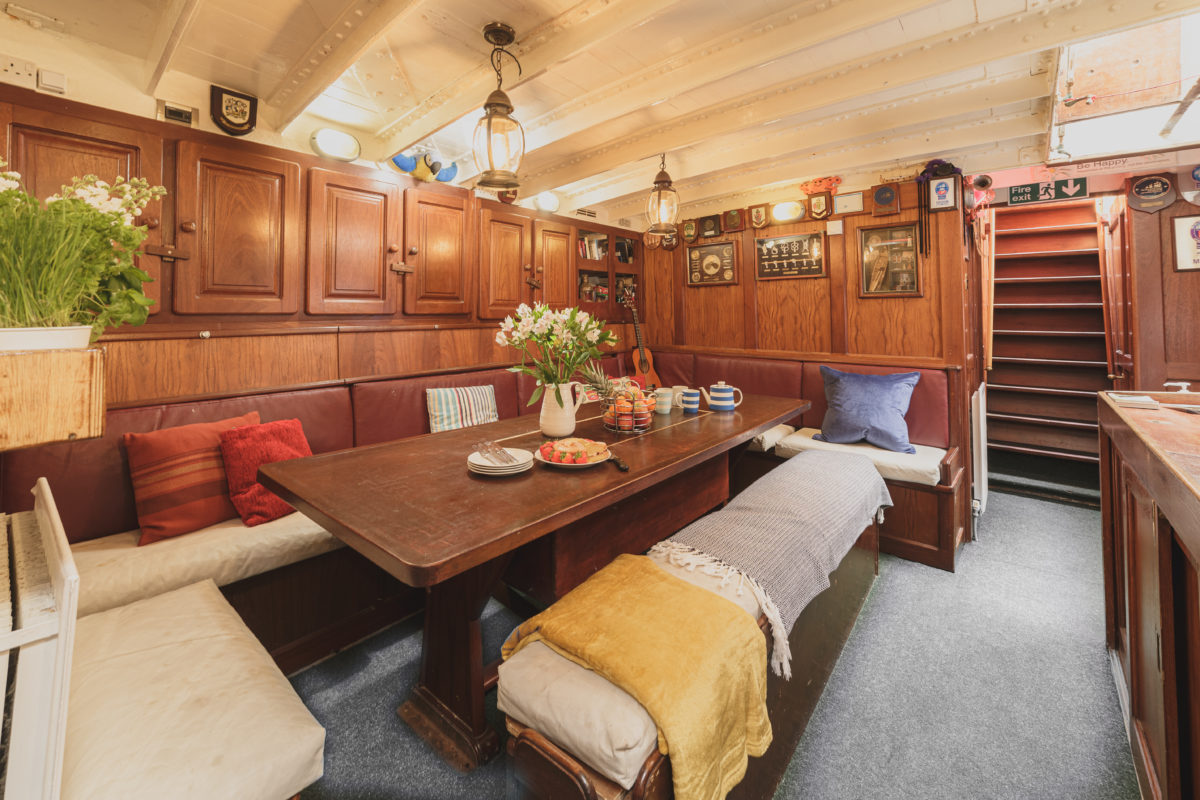 We have a sophisticated electric pump toilet system on board. To ensure that this is kept operational please only place the toilet paper in the toilet. Any other waste should be placed in the bins in the bathrooms, which are emptied daily.

There are strict regulations on disposing of items into our oceans and seas. Maybe sailing is committed to respecting these regulations, and being considerate to the beautiful marine environment we are lucky enough to explore. Please do not throw anything over the side of the ship. There are bins in cabins, bathrooms and in communal areas. We recycle too so please ensure your rubbish goes into the right correct bins.

We have some great clothing items to purchase as a souvenir of your time with TS Maybe. This can be purchased at the time of booking or you can purchase on board and pay for at the end of your voyage.

To enquire about this voyage please click the ‘BOOK NOW’ button below and you will be re-directed to our booking agent VentureSail Holidays where you can make an enquiry. VentureSail manage all our holiday voyages and the team at the office are available on 01872 487288 if you have any questions.

Had a great time upon the maybe boat, trip of a lifetime that I shall never forget! Big thanks to all the crew members and for looking after us so well and teaching us so much!! And all the trainees for making it such a memorable trip! Highly recommend to all.