Leila has changed ownership many times during her long history and has been loved by generations of enthusiastic sailers and trainees alike.

She is built by F Wilkinson of Charlton, London for Mr Leonard Withers a member of the Temple Yacht Club in 1892. Build as a racing tall ship, she won the Round Britain yacht race in 1904. Over the first 50 years of the 20th century, she had many owners.

During the 1950’s though, she became a houseboat. Peter Tricker and his wife sold Leila to the Carter-Jonas family in 1959. Diana Whayman of Ipswich wrote to us in June, 2009:

“Together with my (late and) ex-husband we owned and lived on board Leila in Ipswich Docks until my husbands’ ill health forced us to sell up and live in a house!

We sold her to the Carter-Jonas family… I’m enclosing a photograph of her taken in Ipswich docks in 1956… We bought her full of mud after sliding off a camber edge and filling up – can’t remember if she was on the Hamble or on the Isle of Wight at the time. My husband was Peter Tricker and was a professional yacht skipper working for Geoff Pattinson … a fruit farmer from Essex who owned ‘Jocasta’ and sailed out of Cowes or West Mersea.” 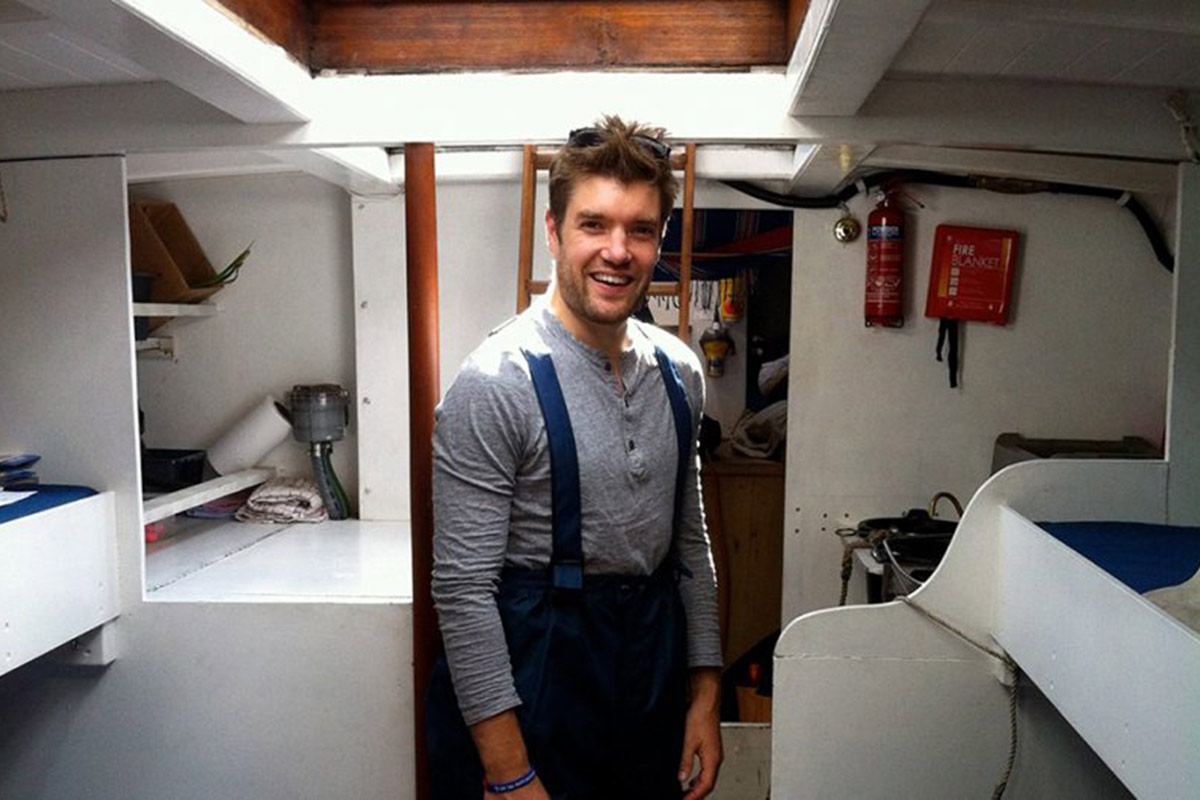 In 2021, Leila will be offering a number of one-week hands-on sailing training voyages in UK waters.

With two professional crew and six trainees, a friendly and cosy atmosphere, this is the perfect opportunity to gain experience in all aspects of sailing a classic tall ship.

Leila was built to race and, as you can see, it is pretty tight down below. We usually sail in the summer and just go down to sleep, eating and relaxing on deck. You will each have a bunk that is big enough to stretch out in and keep your belongings.

Dear David, I am writing to thank you for giving me such a great opportunity to sail in the Tall Ships Races. I had one of the best times of my life. It was great to get involved with. I was very sorry about Leila’s engine – it was such a disappointment not to be able to do the trip on her. Nevertheless, it was a great relief that we got to do the Race on De Gallant. Both on Leila and de Gallant I got to meet lots of new people. In some sense, you were very lucky as you missed the storm and bad weather! You must have worked very quickly to get a new engine installed and make it to Helsinki only one day after we arrived. I loved Aarhus, it was great to spend time with everyone before we set off – the start line was an unforgettable sight. All of the ships at sea with their sails up is an image I shall never forget. It was lucky that it was so calm as we spent most of the day stationery and we were able to get a great view around us. I never would have imagined sailing across the Baltic Sea had somebody said that 12 months ago. I already want to do it again possibly next year! Thanks again, Angus